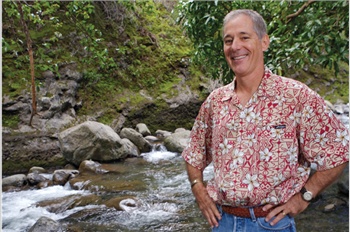 "I've had a radical label attached to me, but most of what I talk about is common sense," Rob Parsons tells me.

We're seated on the lanai of the peaceful Ha`iku home he shares with his wife, Heather. Trade winds tinkle the wind chimes and flutter the colorful Balinese door-hangings as Rob, barefoot in jeans and a T-shirt, describes the wild ride he was on as Maui County's first environmental coordinator (EC) under former mayor Alan Arakawa.

"Enjoyable," "exasperating" and "invigorating" are his words. Among his core projects: an environmental assessment for the harbor system and Superferry, and Na Wai Eha water rights-issues that continue to dominate public attention.

Before Rob's appointment as EC, "there had been a lot of discussion of things that should be done in Maui County," says Arakawa. "It became Rob's job to deal with the different agencies, to look at the laws and regulations, to figure out not only how it should be done, but how it could be done."

Rob took a proactive approach, meeting regularly with agencies like the Department of Land and Natural Resources and the Maui Invasive Species Committee, appearing on local television and radio talk shows, and answering countless questions on issues of community concern.

He helped secure funds for combating invasive species, and for coastal acquisitions. His work on ocean issues-including supporting a commercial-kayak ban at Ahihi-Kinau Natural Reserve, and instituting the Ma`alaea Harbor Interim Pumpout Program to eliminate wastewater dumping from commercial boats-has had long-lasting effects.

Along with the successes came the frustration of issues that evoked community conflict-like how to deal with abandoned vehicles and what to do with the "Montana Beach House," a site acquired by the county that Rob wanted to dedicate as a Maui County Environmental Resource Center, although others wanted it torn down.

Rob learned to appreciate dissent. "Anytime there is opposition, it's a way to educate," he says.

These days, he's known for the "Rob Report," a column in Maui Time Weekly on topics ranging from palm oil to global warming. "If you give people the information, they are capable of making their own decisions."

Born in Wisconsin, Rob moved to Hawai`i thirty years ago, but often returned to work on his brother's organic farm-an experience that fostered a deep interest in sustainable living. "Maui needs to take great leaps toward self-sufficiency," he says. "In a disaster, we don't have a lot in the bank."

In 2000, Rob took his environmental views into the political arena with a run for County Council. In 2002 he ran for mayor-and wound up as EC.

Will he run for public office again? "More like, I'll run from it," he laughs. But he's leaving his options open.

For now, he's content to further his advocacy efforts as an environmental consultant and as a board member of Maui Tomorrow and Sierra Club Maui. Lance Holter, chair of the Sierra Club, describes Rob as "fearless in his advocacy for our basic rights to clean air, clean water and clean lands." Councilmember Jo Anne Johnson calls Rob "a tireless worker for the environment."

Rob is hopeful about the future. "I think people understand some serious shifts need to take place," he says.

What can people do to help? "Be conscious of where your money is going; make informed decisions." Oh, yeah, and read the "Rob Report."

Other articles about and interviews with Rob: