An open letter to the County Council

It's the time of year when children are writing holiday letters, sending their hopes and dreams to a mysterious, omnipotent man who they believe can grant their wishes. No, not Everett Dowling...

I'm writing this letter for a different reason. I want to let you know how disappointed I am-disappointed in you for crushing the hopes of many in our community who dared to hope that we might stop urbanizing our most valuable assets in order to provide for the needs of today. Your review of plans to rezone hundreds of acres at Makena Resort has been slipshod and hasty, and you've shown little grasp or understanding of the foundational causes of our sagging economy. 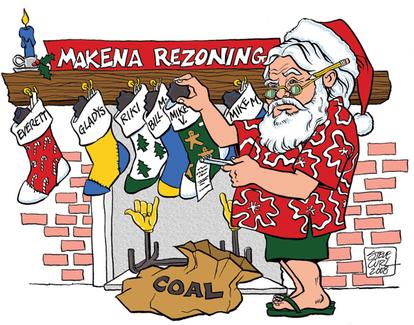 Somehow you have allowed yourselves to be mesmerized by promises of jobs, and have lost sight not only of the laws you are sworn to uphold but of common sense and a true vision for the future that benefits all of our community.

If Maui's children of today could look to the Makena of the future, they might be shocked to see a private, "Members Only" millionaire's enclave where once stood proud Hawaiian fishing and farming villages and places of worship. I pray that you are visited in the night by ghosts of Makena past, present and future, so you may see the consequences of your actions in bargaining away this precious resource, one of Maui's most inspiring wild, open places.

While some limited future development in this area may be acceptable, there should first be careful review of a master plan and, as many have stated, an updating of the Environmental Impact Statement prepared 34 years ago, when access to the area was via a dirt road. Who at that time could have conceived that the current Maluaka project would market condos at prices from $4-$14 million, or that the county water resources would be strained far beyond what can be supplied for already-approved developments.

Earlier this year, you passed approvals for 1,400 new units and a golf course at Wailea 670/Honua`ula, without a proven water source. Likewise, you up-zoned 179 acres on Kahului's outskirts for more retail and light industrial sprawl. Can any of you "show me the water" for that project, or the 40 acres of affordable houses to be built adjacent to Maui Lani as an adjunct to the approval?

Of course, both these projects also claimed to provide more construction jobs, above and beyond the thousands of housing units already on the books island-wide. So, do you really buy that rezoning 600 more Makena acres into urban uses will magically provide jobs, as claimed? The truth is that 152 Makena Resort acres are already zoned for single-family homes and apartment usage. More than 1,000 units could be built, making the entire build-out of Makena more like 2,000 new units, with an unspecified number of affordable units to be built elsewhere in South Maui.

What is the rush to gift wrap
this multi-billion dollar approva
before year's end? You are
giving away an irreplaceable
part of our heritage; you are
stealing from future generations.

And let's hold onto that thought-you're willing to let the developer off the hook for providing affordable housing, after fighting so hard two years ago to pass the Workforce Housing Policy? You should be requiring that 50 percent of all units be affordable, as you did with Wailea 670: 700 market-price units and 700 affordables.

Instead, you reduced that number to 800 market-price units and 400 affordables for Makena. Then, you retreated further when Mr. Dowling suddenly produced a letter from one of the project lenders, Fillmore Capital Partners of San Francisco, saying that a requirement to supply even that reduced number could be a "deal-breaker" for the project. Auwe! So please, tell the people of Maui, how many affordable units do you think will be built, where, when and what impacts will they bring?

Other testifiers have reminded you that segregating housing units by price is not in compliance with the Kihei-Makena Community Plan requirement to put a mix of housing price ranges in any development area. Why, then, do you choose not to uphold this provision?

Councilmember Danny Mateo: I applaud your "nay" vote to uphold the integrity of the Workforce Housing Policy you helped craft for the benefit of families on Maui. I wish you luck in convincing your colleagues to stand by you, and by local families hoping to one day own a home of their own.

Councilmember Mike Victorino: Can you explain why you joined members Michelle Anderson and Jo Anne Johnson in requesting a nighttime public meeting held in South Maui for Wailea 670, but did not offer the same opportunity for the revised Makena project? Don't working people and students deserve the opportunity to share their concerns? Or is the protracted public testimony something you merely endure, but that isn't likely to sway your beliefs?

Councilmember Bill Medeiros: You changed your vote to a "nay" on Wailea 670 after expressing your concern, as a Native Hawaiian, over ceded land issues. You have heard similar concerns over the proposed Makena lands, so can you explain the difference in voting "yes" this time around?

Councilmember Riki Hokama: Over the past two years you showed great concern over handing Maui's future to off-island developers. You proposed a ban of big box stores to help protect local businesses and keep money on Maui. You have looked to put a cap on new timeshare developments. So how do you justify support for a project that is 90 percent owned by Wall Street's Morgan Stanley? Why didn't you demand a review of their long-term financial viability, given the shaky status of other large investment firms and shutdowns of projects at both Wailea and Kapalua?

Councilmember Gladys Baisa: We all know that serving on the council is a rigorous, often tedious task. Surely everyone needs time to rest and rejuvenate. But as you vacation in Mexico while the community and your colleagues debate this vital matter, some of us wonder what you would have said to defend the zoning approvals.

Councilmember Joe Pontanilla: The Maui News reported that you were struggling to find the right words to express your "yes" vote, that you were moved by Maui Prince Hotel workers' testimony that they could lose their jobs and by construction industry officials looking for an economic stimulus. Does it not bother you that these workers were used as pawns by the developer to help create sympathy to achieve his objectives? It was reported that they were paid a regular day's wage to show up and sport their "Makena-YES!" T-shirts. Part of the overall plan is to demolish the hotel, and at a minimum, Makena workers would be driving through construction traffic daily for the next 15 years. Should bailouts also be offered to other resorts suffering from low occupancy, out of fairness?

Councilmember Molina: As Land Use Chair, you should have required a revised, complete application for zoning. One of the requirements is submittal of a complete project plan and development plan, showing building and parking sites within the overall resort plan. Failing to comply with the zoning ordinance puts the county in a precarious legal position. The potential of legal bills and a buyout are a hundred-fold what similar oversights cost taxpayers at Montana Beach. Just something to ponder on the long flight as you take your family to Las Vegas for the holidays.

Ron Sturtz, sage leader of Maui Tomorrow who passed away one year ago, once said that any project requiring 40-plus conditions to try to make it acceptable must be fatally flawed to begin with. While Councilmember Anderson is to be congratulated for her painstaking, thorough crafting of 44 conditions for the proposed rezoning of 603 acres, it must be pointed out that these same conditions do not apply to the 152 acres already approved for development. And frankly, the county has a poor track record of insuring that conditions of zoning are enforced years later when a project is underway.

Had the council asked for a legal opinion on whether a Supplemental EIS is required after three decades and numerous changes, there could have been an opportunity to conduct proper legal assessment of potential project impacts. So what is the rush to gift wrap this multi-billion dollar approval before year's end? You are giving away an irreplaceable part of our heritage; you are stealing from future generations.

Have any of you seen the aerial photos on the Maluaka Web site, of mass grading all the way down to the shoreline, fronting one of the most beautiful coral reef eco-systems on Maui? Had Maui received the big rains that dumped on Kauai and Oahu last week, countless tons of mud and silt would have been carried to the ocean, much like the torrents that swept through the Palauea Mauka project in October 2003.

Many testifiers have sung the praises of the development's front man, Everett Dowling. Others have reminded you that he has not always lived up to his word. I encourage you to stick to the complex issues of zoning impacts, and not to let personalities color your perspective. You are being asked to review an enormous zoning change in the Makena region, not to decide whether the project applicant is an upstanding, philanthropic citizen.

Likewise, please don't misconstrue my concerns and constructive criticism as a personal attack. My interest is to help envision a future we can all agree is the best, wisest possible choice for our community.

But it's clear to me that you have taken shortcuts in your responsibilities to give this project proper, legal review. That concerns me, because it puts us all at risk.

Like a parent or a stern schoolteacher, I'm here to tell you that I expect better, and that you haven't done your work well enough to earn a passing grade.

Ten years ago, during council review of the Upcountry Community Plan revision, Lance Collins, then a teenager, stepped to the microphone. Without saying a word, he pulled out a camera and took photos of the councilmembers. "I just want to be able to remember," Collins said after the tense silence, "who were the councilmembers that forever changed the nature of Upcountry Maui."

What will be your personal legacy as public servants to our island community? Are you OK with having your names etched on security gate plaques through the Makena region? Or is it possible there is something of greater value that we all can work together to achieve?

N early thirty years ago, plans were drawn up for condominiums fronting Big Beach, now the centerpiece of Makena State Park. It took years of dedicated efforts to acquire the land for public usage; it was an inspiring, collaborative community effort. What have you set in motion to help encourage a similar win-win for the proposal in front of you today?

I extend a heartfelt holiday greeting and well wishes to departing member Michelle Anderson. Mahalo nui loa for your exemplary public service, and a tip of Santa's cap to Jo Anne and Danny, as well.

To those of you who have voted "yes" to Makena rezoning: May you find time amid the busy holidays to drive to Makena and experience the serenity, the beauty, the mana, and to view the places that stand to be changed forever. My simple wish is that the mana of this place may touch your heart and guide your actions on behalf of the community you represent. Mele Kalikamaka, and Malama Makena.