The Spirit of Giving 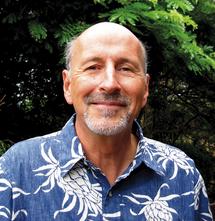 "Maui County, and the environmental community in particular, has lost a hero." So spoke County Council member Michelle Anderson, one of many who paid tribute to the life of Maui Tomorrow Foundation president emeritus, Ron Sturtz during the Dec. 15 memorial service at a packed Makawao Union Church.

Both tears and laughter were shared, in a season usually associated with yuletide cheer, not eulogies. In any case, emotions were deep and praise was bountiful in celebration of a man who hit the ground running when he moved to Maui 10 years ago.

Sturtz, 62-a trial lawyer in California who was raising two daughters with his wife Merry-had been a frequent visitor to Maui. In 1997, he fulfilled his dream of moving here. Steeped in a spirit of working to mediate conflicts and work for justice, he found allies and friends easily.

He joined Maui Tomorrow to work on issues like renewable energy, water resources and affordable housing. In the past two years, he devoted much of his time towards efforts to see that Hawai`i Superferry would not sidestep a need to comply with the stateenvironmental laws.

Sturtz gave generously of his time and wisdom for the betterment of Maui's community, environment and the quality of life we will pass on to future generations. He embodied, in Anderson's words, "A dedicated commitment rarely seen in today's world."

Diagnosed with brain cancer earlier this year, in March he underwent surgery at Stanford Medical Center, enduring follow-up radiation treatments while staying close with Mainland family members. After a "best-ever" July family reunion in Ohio, he returned home to Maui. His periodic MRI's showed no re-growth of his tumor.

In late August, Sturtz and attorney Isaac Hall traveled to Honolulu, where the Supreme Court addressed the appeal of Maui Tomorrow, Sierra Club and the Kahului Harbor Coalition challenging the state's exempting Hawai`i Superferry from an environmental review. The court rendered a unanimous decision upholding the law these Maui groups fought to defend.

Through September, Sturtz was vigilant, spending much of the time in Judge Joseph Cardoza's courtroom during a month-long hearing on a request to keep Hawai`i Superferry in port until an Environmental Impact Statement (EIS) could be completed. In early October, Cardoza handed down another victory for the Maui groups, ruling that Hawai`i Superferry could not begin service until the environmental study was done. But it was a short-lived triumph: a special session of the state legislature soon passed a special law allowing the Superferry to sail around that legal requirement.

Despite his adeptness in legal matters, Sturtz didn't like the adversarial model. Older brother Larry said he likened his beliefs to practicing "universal law," striving for peaceful, just solutions rather than protracted courtroom battles.

In March 2005, Sturtz, Superferry Chief Executive Officer John Garibaldi and I sat through two long mediation sessions in Hall's Wailuku office. Though bringing characteristic thoughtfulness and compassion to this interaction, Sturtz and Hall couldn't compromise on Garibaldi's steadfast refusal to prepare an EIS, and the issue went to the courts.

Maui Tomorrow's Acting President, Judith Michaels, recently recalled a comment about Sturtz shared by former board member Susan Bradford. "His mere presence brought a dignity to the room," she said. He was called a "pillar of our community," a fitting description to match his lanky 6'4" frame.

Portrayed as a teacher, mentor and healer, it was not so much what Sturtz did, but how he did it. My enduring memory of him is the warmth of his smile and how he took the time to look into the eyes of those he met, savoring the moment before he would open his arms to share a hug.

In a world short on role models, Ron Sturtz stood tall as a family man, friend, eco-activist, peacemaker and example of conscious loving and unselfish giving. Isn't that what Christmas is all about?

This year, National Public Radio reported, between 140 and 150 million Americans went shopping the day after Thanksgiving. It's difficult to believe half the population of our country would participate in this orchestrated shopping frenzy-caught up on the buying treadmill.

I suggest pausing a moment to consider the implications of this conspicuous consumption of things that may often be treasured about as much as a fruitcake. A great place to get some perspective is by watching a short video on the Conscious Media Network called The Story of Stuff (www.storyofstuff.com). This fast-moving 20- minute video tracks the real impacts of extraction, production, distribution, consumption and disposal.

It's full of useful factoids:

? America represents five percent of the world's population but uses 30 percent of its resources

? 80 percent of the planet's original forests are gone

? Even if we recycled everything we bought, it wouldn't offset the 70-fold waste of producing the consumer goods in the first place

Remember that right after 9/11, President George W. Bush told us to go shopping. Our highest purpose, it seems, has become consumption.

I think it's high time that we wake up and realize that we can share love and kindness in ways that don't involve massive consumer spending, purchasing sugar and chocolate-coated treats and plugging in Christmas light displays that call for Maui Electric to burn more fossil fuels while doubling our electric bills.

It's time to downsize. Having worked with many Hawai`i environmental organizations, I understand how much they depend on volunteer donations of time and money. Year-end gifts to such non-profits are also tax-deductible.

In a short seven years, Maui Coastal Land Trust has made a huge difference throughout Maui County. They succeeded in purchasing the 277-acre Waihe`e Preserve, once slated for development, for conservation purposes. They are currently engaged in ongoing cultural and eco-system restoration on that property, and are working on numerous other projects, including the establishment of permanent conservation easements.

Sierra Club-Maui Group hosts monthly hikes, addresses numerous local conservation and planning issues and joined legal efforts regarding the Superferry. They are active advocates for local, renewable energy solutions and have a wealth of valuable links on their website.

Community Work Day works tirelessly to coordinate volunteer clean-up efforts of our roadways and beaches, partnering with Keep America Beautiful. They also partner with replanting efforts of coastal dunes and with restoration of Old Maui High.

Maui Food Bank especially needs donations around the holidays. They say 5,000 children in our island `ohana depend upon them this time of year. Doesn't caring and sharing of real food make more sense than buying candy canes or cookies?

Ron Sturtz's family asked that anyone wishing to honor his memory donate to Maui Tomorrow Foundation or to the American Brain Tumor Association. I intend to do both.

The Maui Tomorrow donations will support ongoing efforts to assure that political and corporate interests won't further undermine Hawai`i's environmental laws-Act 2, passed in special legislative session, allowed Hawai`i Superferry to sail. On Saturday, the Maui Tomorrow board announced that it would appeal Judge Cardoza's decision to lift the Superferry injunction, as the judgment may well be unconstitutional.

In a short 10 years on Maui, Ron Sturtz gave generously so that future generations may enjoy the precious environment and quality of life that we hold so dearly. Ron accomplished a lot, and always with impeccable style, grace, dignity and a spirit of giving. I'm trying to find comfort in focusing not on what we've lost with his passing, but by how much we all gained by having him as a part of our lives and community.

Ron, we'll sure miss you.