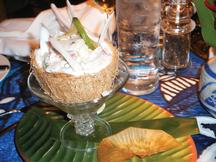 Federal officials recently extended a commercial fishing ban on seven species of Hawaii bottom fish, the Honolulu Advertiser reported on Monday. The Western Pacific Regional Fishery Management Council previously capped the amount of the "deep seven" species in 2007 and again this year, to protect the depleted stocks from further overfishing.

The extension from the original date that fishing in the main Hawaiian Islands was to resume-September 1 to November 15-will allow scientific study of current and historic data, in order to properly assess the fishery stocks.

Local fishermen trying to supply an ever-increasing island population and over seven million annual visitors have run up against that omnipresent buzzword of our time: sustainability. Much like salmon fisheries in the Pacific Northwest, many of Hawaii's fish stocks are teetering on a precipitous edge, and need careful management to prevent a complete crash.

And, whether through eternal optimism or deep denial, many people continue to look to science and technology to help lessen the numerous impacts of humans' vast consumption of limited resources.

In the world of energy and fuel, it is hoped that advances in solar, wind, tar sands, hydrogen, and biofuels may compensate for our having reached peak oil, now that we are finding ourselves on the down slope, with higher costs and diminishing returns.

In terms of food, small farms have given way to corporate agribusiness, genetically modified foods, and huge feedlots to supply the masses, all dependent upon a streamlined transportation system to move products from here to there. In the ocean, entrepreneurs are seeking to improve upon an innovation once practiced by native Hawaiians, fishpen aquaculture.

But the modern open-ocean cages bear little resemblance to the stone fish ponds constructed on leeward shores of Molokai and other islands including Maui. Yet, should they survive the scrutiny of environmental review and economic viability, it is possible that aquaculture operations could play a role in Hawaii's quest for self-sufficiency.

Two such open-ocean fish farms already exist in Hawaii, Kona Blue on the Big Island and Cates International off Ewa Beach, Oahu. Another venture, Maui Fresh Fish, LLC, is proposed for waters off the southern tip of Lanai.

Begun in 1999 as a joint research project between the University of Hawaii Sea Grant program and the Oceanic Institute of Makapu`u, Oahu, local fisherman Randy Cates took over the operation in 2001. Cates International holds a twenty year lease on 28 acres of submerged lands two miles off the coast of Ewa Beach and is raising moi, or Pacific threadfin, once reserved for Hawaiian royalty.

The Cates operation consists of four 80-foot cages, 40 feet below the surface and anchored to the ocean floor. A portion of gross revenues is paid to the Department of Land and Natural Resources as a condition of the lease.

Expansion plans were announced a year ago, when it was reported that $4.5 million in financing was acquired from a company owned by AOL and Grove Farm owner Steven Case. The influx of capital is intended to support expansion of onshore hatchery capabilities and Cates stated plans were underway to seek a second ocean lease. He believes they can expand their output of 1.5 million pounds to as much as 14 million pounds of moi annually.

Kona Blue Water Farms, LLC, founded in 2001, manages eight undersea pens a half-mile off the Kona Coast in 200 feet of water. Each pen is capable of holding 50,000 Kona Kampachi, a trademarked name for their high end product, otherwise known as yellowtail amberjack. In January, Kona Blue applied for permits to double the size of their operation, increasing their lease area to 103 acres.

Known locally as the kahala, the Hawaiian yellowtail has not been historically revered as a prize catch. A deepwater feeder, it is prone to parasites, earning its nickname of "spaghetti-fish". Even worse, it can be a carrier of ciguatera, a microorganism toxin capable of producing severe gastrointestinal symptoms in humans who eat tainted seafood.

Kona Blue harvests upwards of 100,000 pounds of fish monthly, and projects 2008 sales of $9 million, mostly on the Mainland. Their corporate offices are now in San Francisco, closer to the sushi markets and upscale restaurants that feature their product. The Kona Blue website also lists locations in thirty-three states and Canada where diners can find Kona Kampachi.

On June 24, Maui Fresh Fish gave a presentation to the Governor's Lanai Community Advisory Council on their proposal to lease 100 acres off the south shore of Lanai to raise opakapaka in ten open-ocean pens. The plans are particularly ambitious in light of the fact that there has never been commercial production of opakapaka.

An onshore hatchery in the Waiehu area of Maui would pump seawater from a deep well, with temperatures carefully monitored, in hopes that adult fish will breed year around. Information from a January, 2008 scoping meeting document indicates that hatchlings would be transported from Kahului Harbor on Maui to Kaumalapau Harbor on Lanai. From there, they would be transported to the lease area and, "pumped into nursery net cages suspended within the [larger] Aquapod cages."

After 16-18 months, market-sized fish would be harvested 1-3 times weekly, and delivered on ice to Ma`alaea Harbor in South Maui.

But the proposal may have a ways to go to gain support from Lanai residents and others. The Star-Bulletin reported that the proposed location was in an area that is one of the favorite fishing grounds, according to one Lanai fisherman. Fishers and divers favor the same leeward spot coveted by Maui Fresh Fish.

The same may be true of endangered humpback whales, and the location is within the boundaries of the Hawaiian Islands Humpback Whale National Marine Sanctuary. Quoted in the newspaper article, Lanai resident Ron McOmber said, "We have a pile of humpbacks there."

Marine mammal entanglement in aquaculture cages or lines tethering them to the ocean bottom is but one of many concerns raised by those who have carefully studied impacts of open-ocean aquaculture. The whale sanctuary issue also brings up a potential conflict within the U.S. Department of Commerce, the agency that oversees both fishery operations and marine reserves and sanctuaries.

In 2006, Carlos Gutierrez, the U.S. Secretary of Commerce, announced, "I am convinced that the United States must explore the potential of offshore aquaculture to help meet the growing demand for seafood in this country and to create jobs and economic opportunity for coastal communities. To support that, we are making the National Offshore Aquaculture Act of 2005 a priority now for this department and for the country."

Federal legislation is now pending to open U.S. waters, from three to twelve miles from our shores, to such ventures.

But Food & Water watch, a nonprofit consumer organization with offices in Washington, D.C. and San Francisco, cautions against widespread fish farming in public waters. In the executive summary of "Fishy Farms-The Problems of Open Ocean Aquaculture," they state that despite, "substantial financial and political support, open ocean aquaculture has not been shown to be environmentally sustainable, financially viable, or technically possible on a commercial scale."

Farmed fish also need high quality protein, and fishmeal and fish oil derived from wild fish populations may be used to feed caged fish, along with soy and wheat meal to form the pellet feed. Aquaculture now consumes 80 percent of the world's fish oil and half of the fishmeal each year, with the industry's usage tripling from 1999 to 2003.

Caged fish may also be susceptible to disease and sudden die-off, which can spread to wild fish populations. As a reader of the Star-Bulletin article said in an online forum, "Any diseases would be like a dandelion in the wind," given the strong current in Hawaiian waters.

The Food & Water Watch report also reveals that Cates International and Kona Blue have benefited from $3.3 million in public subsidies, meaning that each of 50 or so jobs at the two facilities cost U.S. taxpayers about $63,000 apiece.

But, with prices running at $8.75 a pound for whole fish and $17 a pound for filets of Kona Kampachi, will its production have any impact on a whopping $9.2 billion U.S. seafood trade deficit? The report asserts, "It is unlikely that when someone eats a sliver of Kona Kampachi at a sushi bar they will eat one less tuna sandwich or fish stick."

While Secretary Gutierrez may be enthusiastic about the opportunities for widespread open ocean fish farming, National Atmospheric and Oceanic Administration funded research acknowledges that little is known about the environmental effects of such operations.

Given that caveat, it makes sense to follow the same advice driver's education teachers give their students when coming to a yellow light: Proceed forward slowly, and with caution.